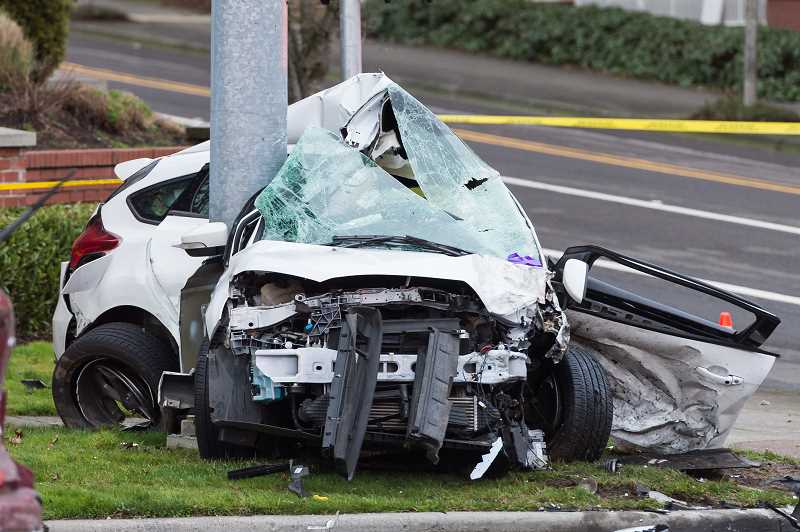 Fatal car accident oregon today,Portland Firefighters responded to a crash at 6:31 am today and determined the crash involved a red Honda CRV and a pickup truck. The pickup truck carried four adult males. Two escaped the vehicle before firefighters arrived, while the other was trapped and had to be extricated by firefighters. The three surviving passengers were taken to Emanuel Hospital, and two patients were treated in the trauma system. The intersection will be closed while investigators determine the cause of the accident.

A collision between a pickup truck and SUV in Salem, Indiana, today has killed two people, including a woman who was driving the SUV. Kaitlyn Allen, 20, was pronounced dead at the hospital after the collision. Brett, the truck driver, was not hurt in the crash, but he is still in critical condition. The accident remains under investigation. ODOT and the Sisters-Camp Sherman Fire District were at the scene.

The accident is under investigation, and the cause of the fatal crash is still unknown, although authorities believe that limited visibility due to fog and the controlled burn near the interstate were contributing factors. While charges are pending in the crash, the investigation into the fatal collision continues. The death of the Salem woman, a mother of two boys, has shocked the community. The crash is tragic for her family, and it will surely affect other people.

A pickup truck was driving eastbound on Highway 20 and collided with a car in Salem. The driver of the pickup truck had apparently overcorrected before crossing the center line and swerving into the westbound lane. Luckily, neither vehicle was injured, but the passenger in the pickup truck died at the scene. Highway 20 was closed for eight hours while the investigation continued.

A big rig driver drove northbound when he missed the red light and hit a Toyota Solara. He then collided head-on with a Nissan Altima and Toyota Camry. The man driving the Solara died in the accident and the woman who was driving the Altima was seriously injured. She was rushed to Grady Memorial Hospital for her injuries. The truck driver and other passengers in the other vehicles were injured, but did not suffer life-threatening injuries.

A fatal crash is closing North Columbia Boulevard near the Kenton Neighborhood and the Portland Police Major Crash Team is investigating. Officers from the North Precinct responded to the scene of the crash at 2:23 p.m., and found 2 vehicles in a wreck. One of the victims was pronounced dead at the scene. Another person was found nearby, and was transported to a local hospital with injuries. The other vehicle had 5 occupants, including three children. All were transported to area hospitals, and their conditions are unknown.

The driver of the stolen car, Andrew Michael Bachman, died at the scene of the crash. The car he was driving was speeding and recklessly on I-5 near the Rosa Parks Way exit. The driver crossed over into the westbound lane and struck another car head-on. Bachman was wearing his seatbelt, and all of his passengers were wearing seatbelts. A police officer opened fire, and the driver of the other car died as a result.

One person was transported to the hospital, while two were treated and released at the scene. WSDOT issued a traffic advisory for the Interstate 5 southbound, with alternate routes being suggested to avoid the stranded travelers. Exit 132 state Route 16/South 38th Street and Tacoma/City Center are available for travelers. The roadway was reopened at 10:15 a.m.

The Portland Police Department responded to a carjacking attempt at gunpoint on the freeway near milepost six, south of the St. Johns Bridge interchange. Paramedics arrived at the scene, where they found a deceased driver. One of the other occupants in the car was taken to a local hospital. Immediately following the crash, Portland police closed the freeway in both directions.

Police in Oregon today identified the driver of a red Honda CRV as the victim of a fatal car accident. The woman driving the car, who was from the Bay Area, had gotten into the wrong lane and hit a BMW. The car had been traveling at 40 mph, the speed limit on the Pioneer Trail. The woman was not wearing a seat belt at the time of the accident and was intoxicated.

The driver of the red Honda CRV was later identified as a woman who had been drinking and driving. The Honda CRV had an airbag defect and was a rented car. The airbag lacerated her throat. The car had four airbag recall campaigns between 2009 and 2014, but the woman had never responded to them. She had not read the recall notification and the crash resulted in her death.

Reopening of Highway 26 in Multnomah County

Governor Brown announced a framework for reopening the economy and reopening Highway 26 in Multnomah County today. This framework will require counties to hire 15 contact tracing staff per 100,000 residents. Multnomah County has a population of 812,855 people. The county is hiring 35 more contact tracing staff to assist with various community activities.

A week ago, on June 12, the Multnomah County public voted to reopen Highway 26, but Governor Kate Brown denied the request hours later. This decision was rescinded after an investigation revealed the county failed to meet several key requirements. The reopening of Highway 26 in Multnomah County is only the first phase of the project. More than 20 retail businesses will be allowed to reopen in phases, including the highway itself.

After multiple trees blocked Interstate 5 near the Oregon Zoo this morning, ODOT crews were on the scene to clear the roadway. However, the agency did not provide an estimate for when the road would reopen. On Monday, at least seven thousand Portland General Electric customers were left without power. Pacific Power restored power to nearly all 15,000 of its customers in Multnomah County.